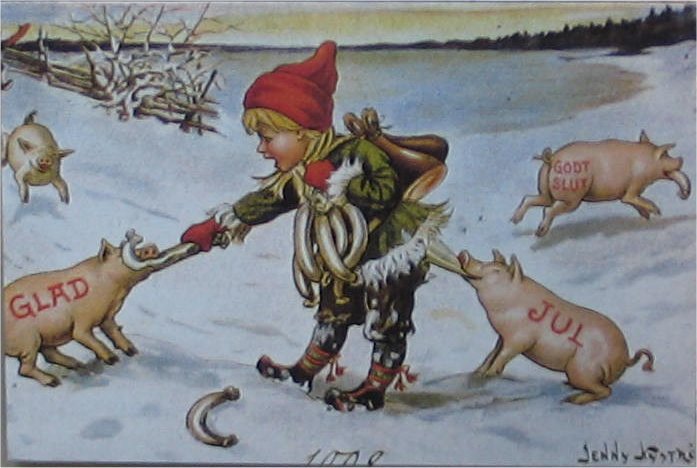 I had no idea about the important role pigs play in Swedish culture until I visited the American Swedish Institute in Minneapolis earlier today.

Apparently pigs are a particularly important part of Christmas Eve meals in Sweden. There is a lot of Swedish art that depicts pigs in humorous situations, which is commonly seen on Christmas cards and in stories.

Here are a couple examples of such art.

In the first photo (by Swedish artist Jenny Nystrom), apparently a woman and her daughter are dancing with their pig friends. Looks like a fun party to me! 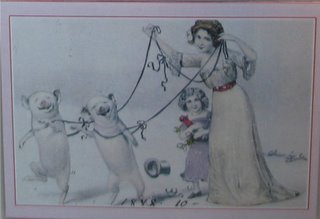 But the image featured on this blog post is my favorite (which is also by Jenny Nystrom). A child is playfully fighting with a group of pigs over some sausage (which has disturbing cannibalistic implications that I’ll disregard for now). Each pig has something written on it. The one on the left says “glad” which means “joy” in Swedish. The second one says “jul” which means “Christmas.” But my favorite is the one on the right. Unfortunately it’s hard to see in this photo, but that one has “godt slut” on its ass. And no, it’s not just a dirty pig (although it is quite humorous, especially since the pig is running away with a sausage in its mouth). What I think that translates to is something roughly along the lines of “happy returns.” But I’m not entirely sure and am still trying to figure it out.

Bottomline – I now have a new respect for Swedish culture.

By the way, the Institute is located in a quite beautiful building that includes many interesting displays. I would highly recommend it if you are in the Minneapolis area.