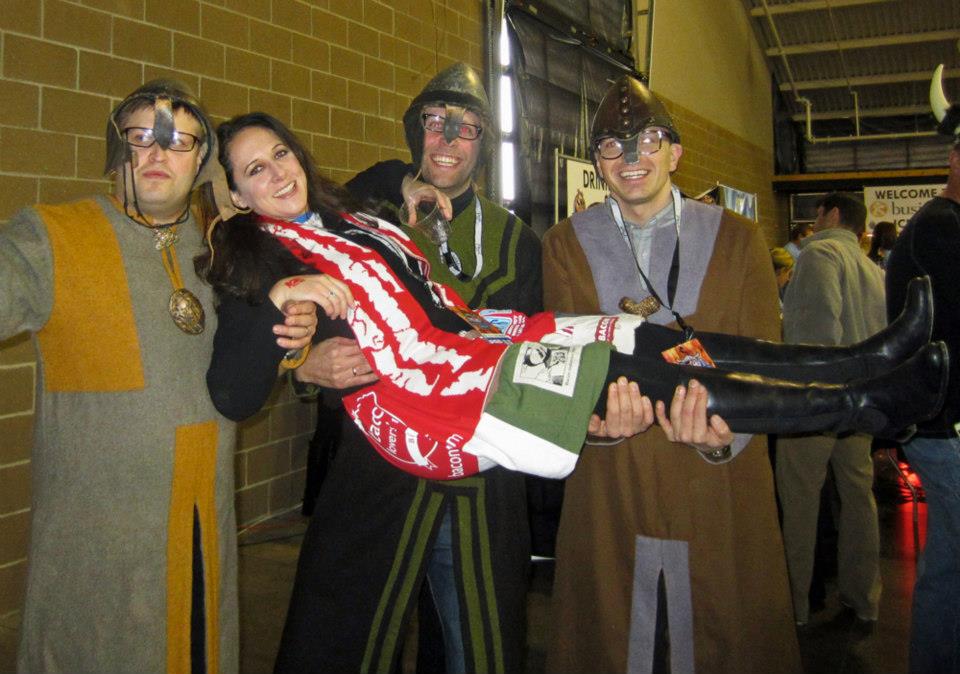 “We create a safe environment where people can express their love for bacon.”
-The Iowa Bacon Board

The Blue Ribbon Bacon Festival in Des Moines, Iowa celebrated its 6th year of bacon fellowship on February 9, 2013. This has become the premiere bacon festival in the United States and therefore, the world, ‘cuz no one does bacon like Americans do. ‘MERICA!

The Iowa Bacon Board’s annual event brings people together to celebrate their common love of bacon. When I first attended in 2009, the crowd topped out at 300 and the venue was the High Life Lounge, a small dive bar on the outer edges of the downtown business district. But Americans – and Iowans in particular – love their bacon, and when word gets around that bacon eatin’ is going on, demand quickly exceeds supply.

The 2013 Blue Ribbon Bacon Festival sold out 8,000 tickets in only 3 minutes and took over 2 buildings at the Iowa State Fairgrounds. 5 tons of bacon were served. 30+ vendors presented dishes ranging from Bacon Pad Thai to Bacon Gelato. Alcohol flowed freely for 6 hours straight (and continued at multiple after-parties that went well into the early morning hours).

This year’s Bacon Fest also had an international flair. Partnering with a delegation of Icelandic bacon lovers, the event’s theme was “a journey to the land of fire..and ice…and bacon.” One of the buildings was devoted to all things Iceland including baked cod wrapped in bacon, smoked char and bacon chowder, and fermented shark with a schnapps shooter. There actually wasn’t any bacon involved in that third item which was apparently just some sort of initiation/bonding ceremony. All I know is that it seemed like the festival’s fun factor increased post-shark/schnapps.

So you missed the 2013 Blue Ribbon Bacon Festival but are dying to go in 2014? Then you better be ready to log on at the exact time tickets go on sale and have your credit card information at your fingertips so you don’t miss out. You have 11 months to put together a strategy to make it happen!

You can view more photos from the event by clicking here.

Following is a list of all the dishes that were served at the 2013 Blue Ribbon Bacon Festival. The number of dessert items was particularly impressive and a sign of how much our bacon palates have evolved in the past few years. I’m already looking forward to the 2014 festival and hope to see more of my fellow bacon lovers in Des Moines!