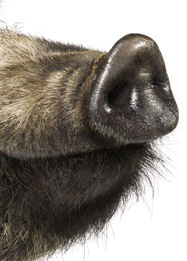 The following post’s relevance to bacon may not seem immediately obvious, but bear with me for a moment…

The images you see in this book are the end product of a journey of discovery and learning how to connect with the soul and essence of all creatures.

…when a subject is stripped from its context, its behavior, rather than its purpose, is all that remains.

These images are an attempt to reveal an underlying consciousness that all living things share.

So…you’re wondering which part of this has to do with bacon?

The answer…there is a great photo of a wild boar, which I’ve given you a preview of here (but I’m not gonna show you any more of the photo because you need to check out his website and take a look at all of the other fantastic photos you will get to see when you purchase a copy of the book!).

Even though I’m a big fan of bacon, the reality is that bacon comes from the humble pig, an animal that is worthy of the kind of respect that Andrew displays for animals in his book.

(And wild boar bacon happens to be one of the best kinds of bacon I’ve ever eaten – see, I told you I’d bring it back to bacon!)

Anyway, Andrew is a great guy and the book is awesome, so go buy a copy now!