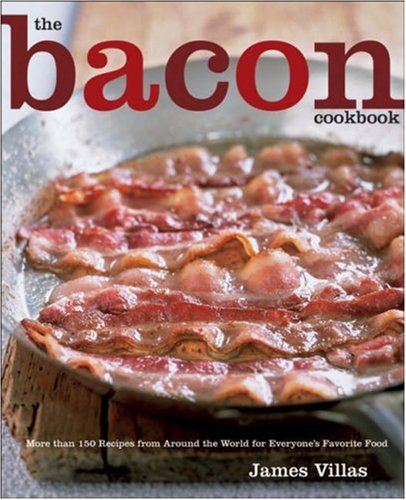 James Villas, renowned author of numerous cookbooks and food-related essays (The Glory of Southern Cooking, Stalking the Green Fairy, Between Bites: Memoirs of a Hungry Hedonist) and former Food and Wine Editor of Town & Country Magazine, recently published a book about the Best Meat Ever.

The Bacon Cookbook is an international guide to bacon that includes over 150 recipes for various ways to enjoy the deliciousness of cured pork belly.

In describing the 43 commonly known varieties of bacon that can be found in 13 different countries, Villas highlights those adaptations that might not be as familiar to the average bacon-loving American such as toucinho (“pig belly that is either dry-cured and smoked or air-cured…produced in northern Portugal from pigs fed chestnuts and potatoes”), bauchspeck (“air-cured, birch-smoked pig belly popular in Switzerland and southwestern Austria”), and lop yuk (“pig belly that is either air-cured with soy sauce, brown sugar, and spices for seven to ten days till mellow and very hard, or cured for four days, then smoked about five hours…used for flavoring numerous Chinese dishes”).

The Bacon Cookbook also contains recipes for using all of the bacon varieties described in the beginning of the book (and very helpfully makes suggestions for substitutions when you can’t get your hands on those bacons that aren’t commonly available in the United States). The recipes range from the familiar (Iceberg Wedges with Bacon, Blue Cheese, and Buttermilk Dressing; Quiche Lorraine; Cobb Salad; and The All-American BLT Sandwich) to the more adventurous and exotic (Bacon, Peanut Butter, and Scallion Canapes; Swedish Open-Faced Mussel and Bacon Sandwiches; Chinese Sweet Rice with Black Mushrooms and Bacon; and – again with the peanut butter – Bacon and Peanut Butter Chocolate Truffles).

Fortunately I was able to get Mr. Villas to take a few moments from his busy schedule to answer a few questions for Bacon Unwrapped.

Question: In your book, you include a pretty extensive list of the various kinds of bacon produced around the world. If you had to pick one favorite bacon variety to sit down and eat right now, which one would it be?

Question: Bacon and peanut butter…what do you think it is about the marriage of these two foods that is so appealing?

Question: Of all the recipes in your book, is there one that is a particular favorite of yours – something that you could eat regularly and never get tired of?

JV: Impossible to answer, but I could never get tired of eating Cobb salad, any corn and bacon chowder, quiche Lorraine, and spaghetti carbonara with pancetta.

Question: Have you ever been introduced to a dish with bacon in it that you didn’t think you would like, but were pleasantly surprised?

JV: Yes, Portuguese Egg and Bacon Pudding (or “egg sweet”). My friend Jean Anderson told me about it, I cringed, but when I made it, it turned out to be glorious–and so unusual.

Question: When eating a piece of bacon on its own, which do you prefer – crispy or chewy?

JV: Depends. I think it’s a crime to overcook any breakfast bacon and prefer mine slightly soft and chewy. But items like lacquered or glazed bacon and Japanese bacon tempura definitely must be crisp. And, generally, I prefer crisp bacon in my salads, and crisp bacon sprinkled on top of soups.

I’d like to thank James Villas for taking the time to answer my questions. And I urge everyone to go out and buy a copy of The Bacon Cookbook and cook something with bacon for dinner!