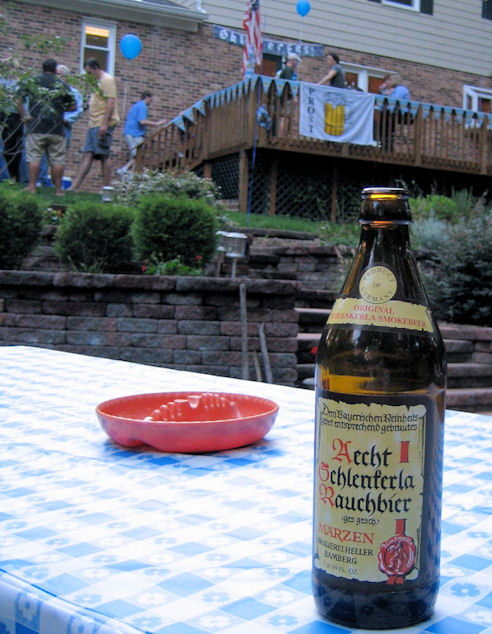 Around this time each year, a former colleague of mine hosts an annual Oktoberfest party at his home in Springfield, VA. It is an event that many of us look forward to and plan our schedules around year after year.

He owns a beautiful property with several acres of forested hills that roll down to a creek. Given the property’s proximity to town, it is truly a unique setting in that it is quiet, relaxing and peaceful, unlike the suburban developments, strip malls, and multi-lane freeways just a couple miles away. The forest also plays an important role at the Oktoberfest bash, as a “Volksmarch” (or stroll through the woods) always kicks off the festivities.

The gracious hosts always provide a delicious spread of traditional German fare such as bratwurst, spaetzle, sauerkraut, and apfel struedel. The only thing guests are encouraged to bring is their favorite German beer or wine to consume between rounds of schnapps and kirschwasser.

For my contribution to the party, it would have been easy to just run down the block to my local liquor store and pick up a six pack of St. Pauli Girl as I’ve done in the past. But this year I decided to be a bit more adventurous. Instead I went in search of a “smoke beer” I had heard about a couple months ago – a German beer that supposedly tastes like bacon.

My search for smoke beer led me to the website for Aecht Schlenkerla Rauchbier (“rauch” means “smoke” in German). Rauchbier is a dark beer that is made by exposing the malt to the intense, aromatic smoke of burning beechwood logs. The beer is brewed in accordance with the Bavarian Purity Law of 1516. Fortunately I was able to order a few bottles from a U.S. distributor to have shipped to my home.

The Historical Brewery Tavern Schlenkerla is located in the German town of Bamberg and has been in operation for 6 generations.

Schlenkerla has become a magic word for a long time, but many do not know where this word originated. Its roots lie within the franconian vernacular. “Schlenkern” is an old German expression for walking not straight (just like a drunk person does). Allegedly one of the former brewers had a funny way of walking due to an accident (or maybe due to the beer), and so he was called the “Schlenkerla” (The ending “la” by the way, is very typical for the Franconian dialect). After a while, the residents of Bamberg also called the tavern “Schlenkerla”, and even though the sixth generation of brewers now taps the beer, the name has remained.

The following excerpt from the Schlenkerla website describes the experience of drinking Rauchbier, and based on my own experience I completely agree with their assessment:

The connoisseur drinks it slowly with relish, but steadily and purposefully. He knows, that the second “Seidla” (half-liter) tastes better than the first, and the third even better than the second. He drinks during the morning pint and during the afternoon break. He drinks it in the evenings, drinks it alone and with company, especially with company, as “Aecht Schlenkerla Rauchbier” makes one talkative and exuberant. It brings together the local with the stranger, as it is common in Franconia to share your table with others. Even if the brew tastes somewhat strange at the first swallow, do not stop, because soon you will realize that your thirst will not decrease and your pleasure will visibly increase. That is written on the coasters, and the coasters are right!

Granted, I didn’t drink enough Rauchbier to find myself being overly friendly with strangers (not that it would have been the first time), nor did I embarrass myself in public (which I’ve NEVER done before…ahem…). But the first sip of Rauchbier is indeed an intense experience. The beer is quite smoky and there is definitely an underlying taste of bacon. The flavors are not subtle. Most people who tried a drink of my beer did not follow the brewer’s advice to continue past the first sip, and some didn’t even make it past the first smell. Once the aftertaste settles, you are left with the smoky taste of bacon on your palate, and for some people it is just too much. But subsequent sips are not as overwhelming once your senses adjust to the flavors.

In the end, Aecht Schlenkerla Rauchbier really is a pretty decent beer that definitely tastes like bacon, and there’s nothing wrong with that. Das perfekte Bier für ein fröhliches Oktoberfest.