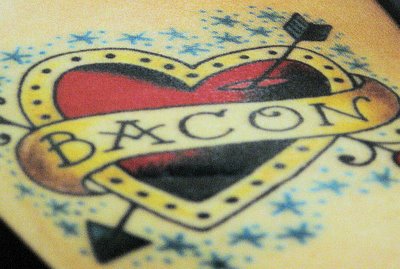 I’ve added another magazine to the list of magazines I comb for bacon references on a monthly basis. The February issue of Saveur Magazine features their annual list of 100 favorite foods, restaurants, drinks, people, places, and things.

And before I finish this entry, I’d like to take a brief trip back in time to the November 2007 issue of Saveur. The last page of the magazine always includes a candid photo in a monthly feature called “Moment.” A co-worker dropped the page from the November issue off at my office a couple days ago, speculating that the photo might be of my arm. Alas it is not, but I have major respect for the person who made this commitment…