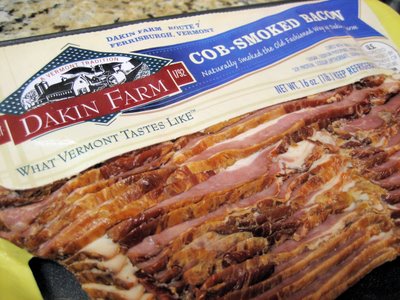 If you enter the word “bacon” into a Google search, you are presented with almost 46 million options. The search results also return a few sponsored links. One of those sponsored links is for Dakin Farm, a Vermont-based smokehouse that boasts of “smoked bacon to die for.”

Given that I’ve seen Dakin Farm show up in the sponsored links of thousands of searches I’ve done for bacon over the last couple years, and because they quite boldly declare that their cob-smoked bacon is “the best bacon you’ve ever tasted,” I finally decided it was time for me to give it a try.

The bacon arrives in a lovely box informing you that you are about to find out what Vermont tastes like. 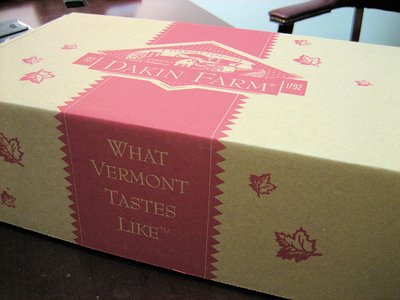 I got a chuckle out of this, because I started thinking of all the places that could not promote their products with the idea of finding out what the state in which the product was produced tastes like. For example, I’m not really interested in knowing what New Jersey tastes like…but I guess Vermont still has enough of a squeaky clean image that they can get away with this promotional tactic.

When I opened the package, I was greeted with a rather strong smoky scent. It is reminiscent of the scent of hickory smoked bacon, although the meat on this particular bacon is slightly darker than what you see in a typical package of raw bacon.

I personally think that baking bacon is the best way of drawing out the flavors. So I put a few pieces in the oven at 350 degrees for about 12 minutes, which gets the bacon nice and chewy with just a slight crisp.

Dakin Farm boasts that this bacon is “lean, crisp and rich with natural meaty flavor,” and I agree. This is quite a meaty bacon – it almost reminded me of the meatiness of beef bacon. The taste was similar to a good hickory smoked bacon, although it had a slightly sweeter aftertaste.

There are a lot of wonderful bacons available to consumers these days, so it’s really hard to declare just one bacon as the “best bacon.” But the Dakin Farm cob-smoked bacon was quite nice, and if you like thick-cut, meaty bacon with a strong smoky taste, then this is a bacon for you.